skip to main | skip to sidebar

My Son Claude, the Christmas Baby. 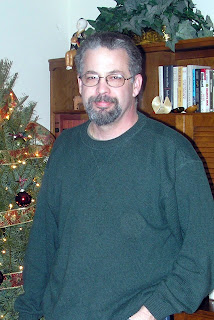 My son Claude was born on Christmas Day, in 1957. His expectant mother and father went outside on Christmas Eve hoping to see a bright new shining star in the heavens. Unfortunately, it was cloudy.
All kidding aside, Claude has been an enduring gift. He has also been an inspiration because of his courage and tenacity in the face of adversity, often against long odds. He and Monica have produced two beautiful children. And, finally, he has a great sense of humor (it's genetic!). Merry Christmas, Happy Birthday and a Happy New Year, Claude. I love you!
Posted by David Siltman at 10:20 AM 1 comment: 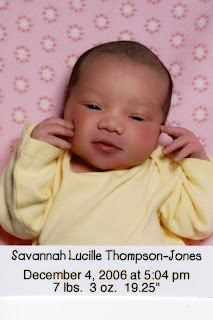 Miss Savannah Lucille Thompson-Jones, after checking out her new living arrangements, decided to share the Rockville home of her parents, Caroline and Darryl. She especially likes her two big brothers, Asher and Kai. Savannah recently passed the eight pound mark and, judging from her eating habits, she seems intent on gaining more.
Savannah's grandfather, Pop Pop Siltman, when interviewed, said he only regrets he was unable to provide similar blog coverage for the births of all his children and grandchildren.
Blog management has announced plans to provide additional coverage of other family members whose names have, thus far, been mentioned only in passing. An attempt will be made to locate and secure rights to photos which will be used to illustrate past blessed events. Stay tuned for future news of this and other breaking news!
Posted by David Siltman at 7:02 AM 2 comments: 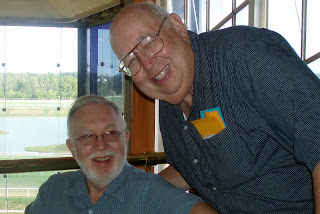 I met Phil in 1961; my first day on a new job in Arlington, Virginia. I was assigned a desk next to his; we've been friends ever since. I don't recall much of our early friendship, but he seemed reminiscent of other colorful characters I had encountered since leaving a small Texas college nearly a decade earlier. I was married to my first wife Claudette at the time; our son Claude was 2 years old. Phil was single and when Judy, his future wife, arrived on the scene, we became good friends.

I recall Phil seeking my advice when mulling over the prospect of marriage. Ever ready to dispense pop psychology, I opined that, because of their different religious backgrounds, marriage might be problematic. It is humbling to reflex back over the past 50 years and note that they are still together while I am in my third (and last) marriage. Just to show what good sports they are, I was best man at their wedding. The ceremony was memorable in many ways, not the least of which was the amusing gaffe by the priest who performed the ceremony. Meaning to say, "Greater love hath no man than he lay down his life for a friend" (a noble sentiment), he inexplicably said, "Greater love hath no man than he lay down his wife for a friend."
Unsure that I had heard correctly, I was afraid to look at Phil, fearing that we might collapse into gales of laughter as we did so often on the golf course.

We remained close as Phil and Judy started their family. They had a girl (Carol), a boy (Charles), and another girl (Barbara). Later, they spent seven years in Europe. While they were gone, Claudette and I separated and divorced. By the time Phil and Judy returned, I had met Vicki, my second wife, and they were back in time to attend the ceremony. Some years later, after Vicki and I divorced, I met and married my third wife, Nancy. Gracious as ever, and obviously immune to shock, Phil and Judy immediately welcomed her into our lives.

I can hear Phil as he reads this. “Hey I thought this was supposed to be about me!” Never one to soft pedal his opinion, Phil gets right to the heart of the matter and lets you know exactly how he feels. Fair enough! Let’s move on.

Note to reader: Phil will probably dispute much of these recollections; that is his nature. Although he has mellowed considerably since the early days, he is still disinclined to suffer fools gladly. Click here to see an early example.


Describing Phil is difficult. He falls into no discernible type or classification. He is as much at ease watching an Opera or a Broadway musical as he is touting a horse race or analyzing a baseball game. He loves a good joke, but rarely admits it. He is quick to spot pretense or sham and even quicker to point it out. He can be counted on to give an honest answer whether you want to hear it or not. He is there when needed most. He has been very supportive during my many trials and tribulations.

Finally, it is not unusual to answer the phone and hear the voice on the other end say, “Hey, sh*thead! What's up?” That would be my friend Phil, of course.
Posted by David Siltman at 4:15 PM 2 comments:

If I was a used car, I wouldn't spend any more money on me.

During a recent early morning bout with Insomnia, I started a mental inventory of my various ailments. Not an intellectually challenging exercise, it's true, but I had limited options at the time.
#1. my left shoulder injured 5 years ago. A severely torn rotator cuff; The surgeon said the odds of successful surgery and recovery were less than 50%.
#2. my right shoulder not quite as bad; just a tear in the rotator cuff. Again, the risk/benefit ratio wasn't encouraging.
#3. my left knee is also a longstanding problem. When it was operated on about 25 years ago, I was told I'd need a knee replacement in a few years, so I'm way overdue on that one.
#4. my lower back is also a longtime problem. It hurts constantly, especially when I do something stupid like standing or walking.

Last night I recalled the inventory of ailments discussed above. I was feeling their effects at the time, and said to myself, "At least I still have my good right knee". Shortly thereafter, I got a bad cramp in my right calf.

At this point, one might well ask, "Why not do something about the situation rather than just bitching." Fair question. I have taken action to ease my condition. I recently took a series of shots for my lower back, and have an appointment next week with a surgeon to get a recommendation on that option. I've had physical therapy on a variety of problem areas with little success. I had a hernia repair a couple months ago and a Carpal Tunnel Syndrome procedure a year ago. My overall physical condition is further compounded by two other factors - Arthritis and Parkinson's Disease. These factors exacerbate the other problems.

This litany of problems was not compiled to engender sympathy. My pain is minor when compared to countless others. The real point is that simply trying to fix individual problems doesn't guarantee success. What's really needed is someone with broad medical expertise to consider all my problems, the relative priority of each, the recovery time required for each, and come up with an action plan based on all these factors.
Any volunteers?
Posted by David Siltman at 7:39 AM 4 comments:

My 11/05/06 post described the tense racial atmosphere of Montgomery, Alabama in the late 1950's. It was a time of bus boycotts, freedom riders, and burning and bombing of churches. Some whites were tolerant and did what they could to oppose bigotry and reduce the level of violence. Unfortunately, these people were often ostracized, threatened, or worse. But it must also be noted that most whites growing up in Montgomery had been told by their authority figures (parents, preachers, politicians, editors, law enforcement officials), that Segregation was God’s will and Integration a Communist plot. So it’s no great surprise that many of these southerners felt their way of life was being threatened.

In any event, newspaper editors, for the most part, sided with the power structure. So it was with some trepidation that I wrote the following letter to the Editor. It was an attempt to poke fun at the bigoted opinions which appeared regularly in a daily column entitled, "Grandma". I did not consider my actions brave or heroic, especially since I had appealed to the editor for anonymity. But I did feel vastly superior to this editor who, by publishing my name with the letter, left my family in a very vulnerable position. We received several threatening letters and phone calls. I suppose he thought he was teaching me a lesson. Click here to see letter.


Ironically, I was never really comfortable with the term Integration. I suppose it was because segregationists always railed against "forced integration". The implication, of course, was that people of different races would never voluntarily live together in peace. I preferred the term desegregation, which I took to mean that each person must have the same rights and responsibilities as everyone else.

My experiences as a child growing up in East Texas had already convinced me that separate schools were not equal. I had only to compare the schools I attended with those available to blacks. Likewise,I could buy a house anywhere I wanted, assuming I had the money; blacks could not. The list of injustices committed is long and shameful.

This is not to say everything has worked out exactly as we had hoped. But who would contend that changes were not necessary and appropriate? What thinking person could, in good conscience, wish to return to the days of slavery, lynchings, and Jim Crow?

Although no one is guaranteed success in this country, everyone should have an equal opportunity to become successful.
Posted by David Siltman at 11:44 AM 11 comments: 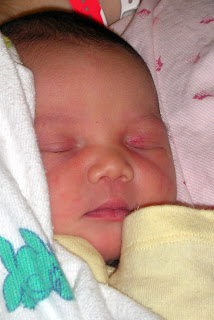 Savannah Lucille Thompson-Jones arrived just after 5PM on Monday, December 4, 2006. She weighed in at 7 pounds, 3 ounces, and measured 19 and 1/4th inches in length. Savanna's mom, Caroline, praised her daughter for making a quick, although not pain free, entry into the world. Savannah's dad, Darryl, rose to the occasion, losing nary a son in Caroline's absence.
Your reporter will continue to find and correct errors in this story, if any do exist, and to provide additional information, if it becomes available. For example, click here.
Someone famous once said that newspapers are the first rough draft of history. So, cut this poor scribe some slack.
Posted by David Siltman at 10:36 PM 2 comments:

Since you're reading this, you've typed, pasted, and/or clicked your way into my blog. Why not include its address in your Favorites or Bookmarks, on the off chance you might want to return? Blogs are composed of: a name, deemed scholarly, clever or profound by their authors; a description, conveying the nature and tone of the information being proffered; a right hand column with items such as archives, profile, favorite links and this little gem; and the left hand column comprised of posts (entries). which are published (included in the blog). Don't you feel a lot smarter already?

Some stuff about me:

David Siltman
Montgomery Village, Maryland, United States
I am a married, retired, blogger, PWP (Person with Parkinson's) and photo bug, with grandchildren, will travel (but not too fast).

labels: click one to see only posts for that topic or else you"ll see everything.